Of Power and Princesses, pt 3

3. Magic, and those who use it 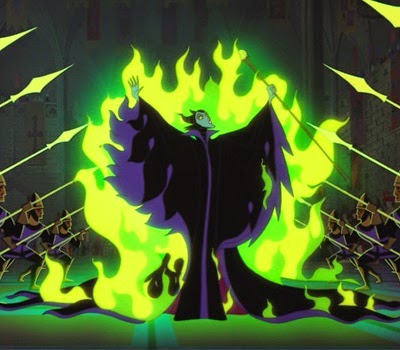 In each of the Princess-verse movies, there are characters that use magic, both benevolent and malevolent. Some possess only simple powers, while other are quite powerful. These characters and the events of the movies build their world’s mythos, form the folklore and legends that inform the characters of each future movie.

However, no one other than Cinderella herself knows about the Fairy Godmother’s actions, unless Cinderella tells them. She might tell Prince Charming and other new family and friends, but since there were no witnesses, it is probably treated as no more than a family story, and has little long-term cultural impact.

In Snow White and the Seven Dwarfs, all magic performed by one character, the Queen. How she became queen is dubious, since as wife of the King, she would not succeed to the throne; it would be Snow White, as the king’s only child who would inherit the crown, though since she was a minor, her step-mother the queen could serve as regent, and later usurp the position. As queen, she is cruel to her step-daughter, Snow White, attempting to murder her several times. Both her use of magic and her malign nature were well known around the kingdom, enough for her to be known as the Evil Queen. Stories of her magic and her deeds would be well known over time.

Similarly, in Sleeping Beauty, Malificent is well known to be magically powerful, able shoot lightning bolts and even transform into a fire breathing dragon. While not claiming the throne herself, her presence strongly influences the nearby kingdoms. She uses these powers for evil purposes, cursing the baby Princess Aurora, kidnapping Prince Phillip attempting to kill him as a dragon. Her deeds were very public are likely to live on in legend for many years.

These three movies appear to take place during the middle ages, and likely form the basis of any legends and stories that exist in the Princess-verse, shaping many of the opinions and attitudes towards magical adepts.

There are a great variety of characters who use magic in The Black Cauldron, from the benevolent Dallben the Enchanter, the megalomaniacal Horned King, to the ambivalent three witches. However, it is the Horned King who succeeds in acquiring the eponymous black cauldron and proceeds to raise an undead army.

The events of Brave, like Cinderella, are more limited, with only a single magic-user, the witch, and limited effects, one transformation (the queen into a bear.) It’s hard to say that this witch is outright evil, given that it is Merida who wants to affect her mother; the witch acts more as the trickster, granting Merida’s wish, but not in the way she expects.

In Aladdin, there are two characters who use magic, Jafar, the sorcerer who wants to take over ruling the sultanate of Agrabah, and the Genie, who, while generally good intentioned, must grant wishes to whomever is his master, good or evil.

Beauty and the Beast only has one character who uses magic, and only in a flashback, the Enchantress. Her powers are significant, able to transform the prince in the Beast, and hundreds of his servants into household objects, all transformations lasting for many years (and presumably would for many more had Belle not broken the spell.) Whether the Enchantress’ action are evil is a debatable point; she took her actions to punish the selfish Prince, perhaps an over-reaction due to his young age, but forcing his many servants to join him in his curse through no fault of their own is cruel and inhumane.

Like in Aladdin, there are two primary magic-users in The Little Mermaid, King Triton and Ursula. While presumably powerful, we see only a little magic performed by Triton, primarily transforming his daughter Ariel from mermaid to human. Ursula, on the other hand, shows many more power: transformation of Ariel, transference of aspect (Ariel’s voice), and transformation of herself, to human and later, to giant squid.

In an interesting twist, there are no actual magic users in Tangled. Mother Gothel simple uses the inherent magic of the golden flower. Later, that power eventually appears in Rapunzel’s hair, and again, when singing the healing song, Rapunzel is only channeling the flower’s powers, not wielding any power of her own.

And finally, in Frozen, we see Grand Pabbie troll doing some minor healing, manipulations of memories, and illusions, and Princess (and later Queen) Elsa producing some significant magic effects. The nature and scale of Elsa’s magic, however, merits more specific discussion.